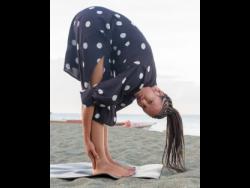 Yoga teacher Kalisse Kelly values accessibility. Indeed, she’s using yoga to allow people to tap into different dimensions of themselves for better health, but she’s also making yoga accessible to everyone through her eponymous company.

“One thing I didn’t like about yoga in Jamaica is that it seemed like only a certain set of people could do it: fit, wealthy people really,” Kelly, 28, told The Gleaner. “I wanted to introduce yoga to everybody: people that are obese, those who have disabilities, people who are older…”

This coincides with her work with the PAH! Deaf Dance Company since last year, where she hosts a free class each month at her Kingston-based studio.

“They come on a Sunday and for one or two hours it’s a non-judgement zone where they can be free to be who they want to be. I teach them yoga, we eat some fruits, and if dem waan dance, do a TikTok, chill, they do that. I’m not the perfect signer but I learn the words and try to communicate with them as best as possible, so, I’m enjoying that.”

But accessibility also extends to the “beginner friendly” hatha vinyasa form of yoga she prefers to teach following her 2018 training at Yoga Angels International. Kelly decided to pursue teaching after being asked by onlookers tracking her yoga journey through social media. She started practising in 2016 after being diagnosed with depression and anxiety, opting for yoga over medication.

“Hatha yoga is a simple form of yoga where you just teach the poses. It’s static, you’re standing in one place and you’re guiding the person through the position. Traditionally in yoga, a vinyasa is a set of poses that you flow through, so, you’re going from one to the next … I strongly believe in people being mobile, flexible and strong, which are the three things I really try to embody in the practice and especially when I’m teaching. I wanted anybody at any point to feel comfortable to come to a yoga session and not feel like they’re stuck in a sequence of poses that they can’t access. I really care about accessibility when I’m teaching and I think that style allows me to do that.”

Not only is Kelly disrupting the local yoga industry through accessibility, but also through the integration of yoga and dancehall through Yoga Vybz launched in January. The concept was a long-standing passion project for Kelly who acknowledged its controversy.

“What I’m trying to do is create something that brought me joy and give it to others; it’s not like I’m trying to hurt other people or ruin the whole culture of yoga. I know that persons could say, ‘Isn’t yoga good enough on its own?’ But it’s something that I really enjoy doing; turning the yoga poses into a flow and then merging it to dancehall.”

Doubting her ability to do it authentically (saying she’s no trained dancer), she decided to partner with dancer and yoga enthusiast Tasha-Gay Bryan, who leads the dancing segment of the session.

“It’s doing so well right now,” Kelly said. “A lot of the feedback I receive is ‘I never knew that I needed the combination of both these activities’, and that is humbling for us because that is what we wanted to bring. We wanted to show people that this particular kind of movement is good for you. The dancing aspect is very fun, hype, brings up your energy, gives you cardio, and then we have yoga at the end where we can go into mindfulness and meditation and working on your flexibility in a static way. I can see that being international if Tash and I play that right.”

She also offers online classes which benefit those who are on the go but still want to be fit and practise yoga. For the sceptics, Kelly spoke of a range of benefits, including increased flexibility, mobility, blood circulation, improved posture, alleviated chronic stiffness and mental illness relief because of the release of feel-good chemicals like serotine and dopamine.

Since leaving her job as a general manager at a prominent restaurant in January, the food management degree holder has been focused on building a solid business and has transformative plans for the future. The latter includes opening an Airbnb in Portland, which will double as a yoga retreat centre.

“I want to make this bigger and into something that can be profitable but yet fulfilling and help a lot of people… It may not be Kalisse Kelly Yoga forever; I’m really thinking of creating a platform for yogis in Jamaica and the Caribbean but I’ll just see how it goes…”